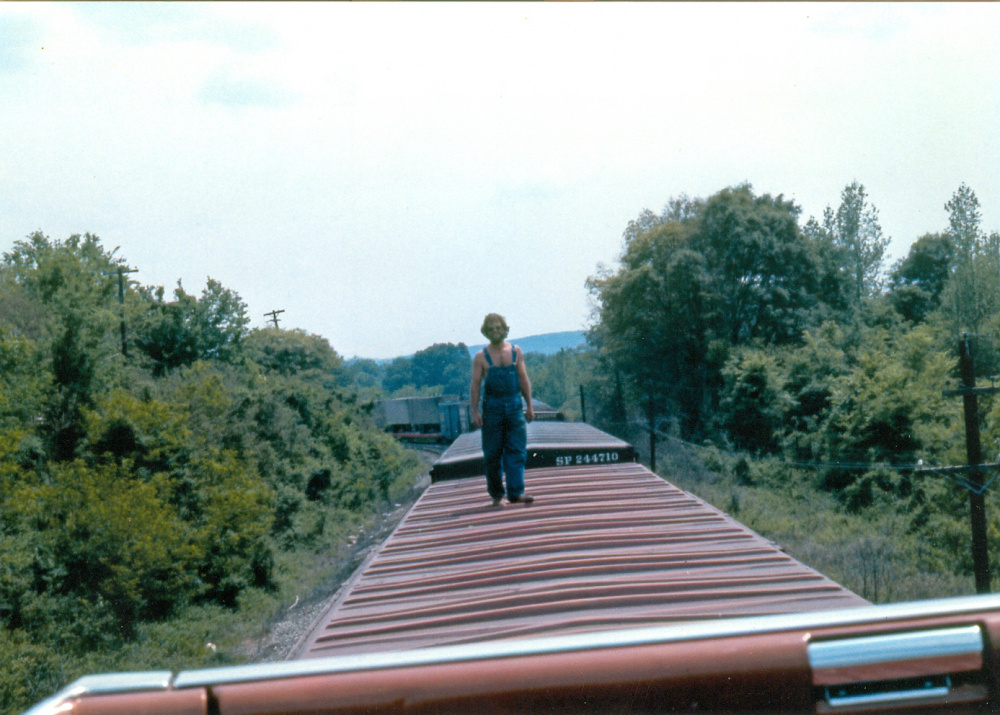 In my mis-spent youth, I used to ride the freight trains.  I had crossed the continent several times, hitch hiking.  Once, I rode a bicycle from Georgia to Steamboat Springs, Colorado.
But my favorite means of hobo travel was riding the freight trains.
In this photo, I am taking a stroll on top of a box car in Tennessee.  My buddy John and I rode the freights from Atlanta, to Denver, John's home town.  John had told his mom that we were going to ride the freight trains, and she immediatley wired him the cash to ride the Greyhound.  John got the check, but, he decided to stick with me and ride the trains. Ideally you want to ride in a box car.  However, there were no open box cars on this train!
We were in the the big Chattanooga yards, looking for a fast freight to Memphis.  We saw that there were several cars carrying autos.   The autos were stacked three cars high.  And on the top deck, we saw an El Camino.  This was a car that had the cab of an automobile, but the bed of a pickup.  We scrambled up about 17 feet above the rails,  and put our gear in the bed of the El Camino, and we sat there, riding backwards at 70 mph as the freight train rolled across Tennessee.
John was sitting in the El Camino taking pictures,  and I took a stroll on the adjacent box car.
April, 1977.

We were in for a rude awakening in Memphis.  Little did we know, they were having problems with "locals" breaking in  to autos on the freight trains, and stealing stereos.  The Memphis train car authorities had brought in 8, plain clothes and bad * railroad cops from Texas, just to catch hobos on freight trains in Memphis.
If you have ever driven through Memphis on I 40, you can see the giant railroad bridge crossing the Mississippi there adjacent to the interstate.
John and I laid low in the Memphis yards, but once we got over the river, we sat up in the El Camino to see the sights.  The view of the river from 17 feet high is fantastic, plus, we had a great sunset.  John was firing away with the Nikon.  And, the damn Texas yard cops spotted us!   Believe it or not, they stopped the train right above the river, and backed it up into the Memphis yards and we were arrested.
The Texas yard cops were pretty rough with us, they took us to the Memphis city jail.  But, they saw that we had done no damage to the autos on the train.  They grilled us for an hour.  They couldn't figure out why some college boys would ride freight trains.  They didn't even print us or photograph us.  In fact, they told us "Last month we caught two  boys riding the train over that river and we stopped the train, and we threw those pieces of s***  into the river off of the bridge!"   That bridge is about 170 feet above the Mississippi.  I thought they were exaggerating but I wasn't sure.  My buddy John was a college boy from Boulder Colorado and he was shaking in his boots.
The bottom line was, they knew we had been in that El Camino since Chattanooga, and we had done no damage to the car.  The cops were befuddled, they just had two boys who were hitching a ride but not vandalizing the train.  They told us they would turn us loose.
But they said,  "Boys, don't let us catch y'all on a freight train in Memphis tonight. You won't like what happens."
We got the message and we went down to I 40 and we hitch hiked across the Big River, and we caught the next train several miles away in Arkansas.
Every time I crossed the Mississippi, for the past ten years,  in the Big Rig on I 40, I thought about that night, long ago, getting busted riding the freight trains in Memphis. 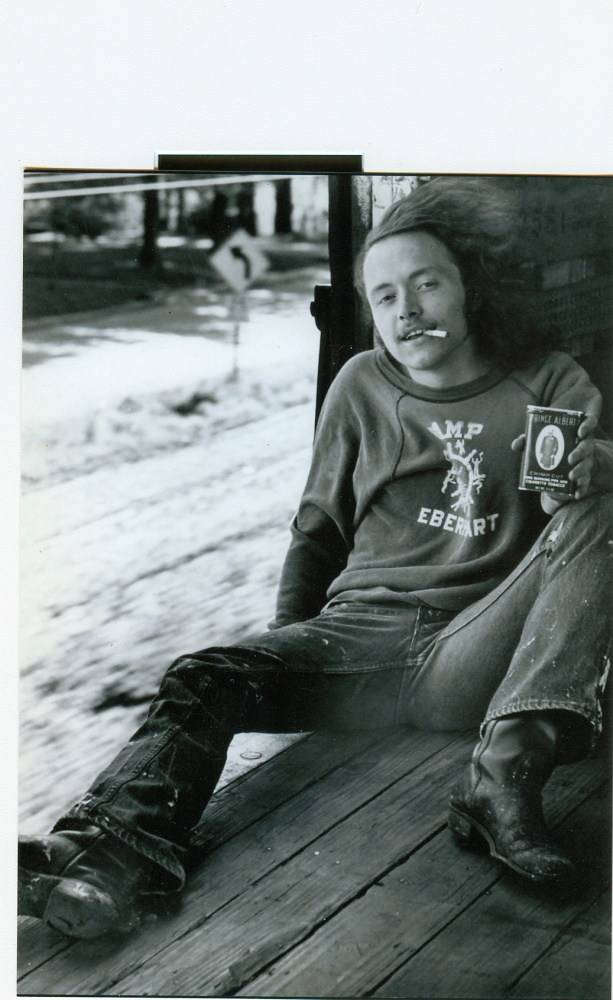 In this photo, my buddy Marc takes a smoke break at 75 mph on a fast freight from Atlanta to Chattanooga, August 1972.
Not all hobos are white trash.  Marc was 19 in this photo but he went on to get a Phd in law from Emory University and he was Valedictorian. 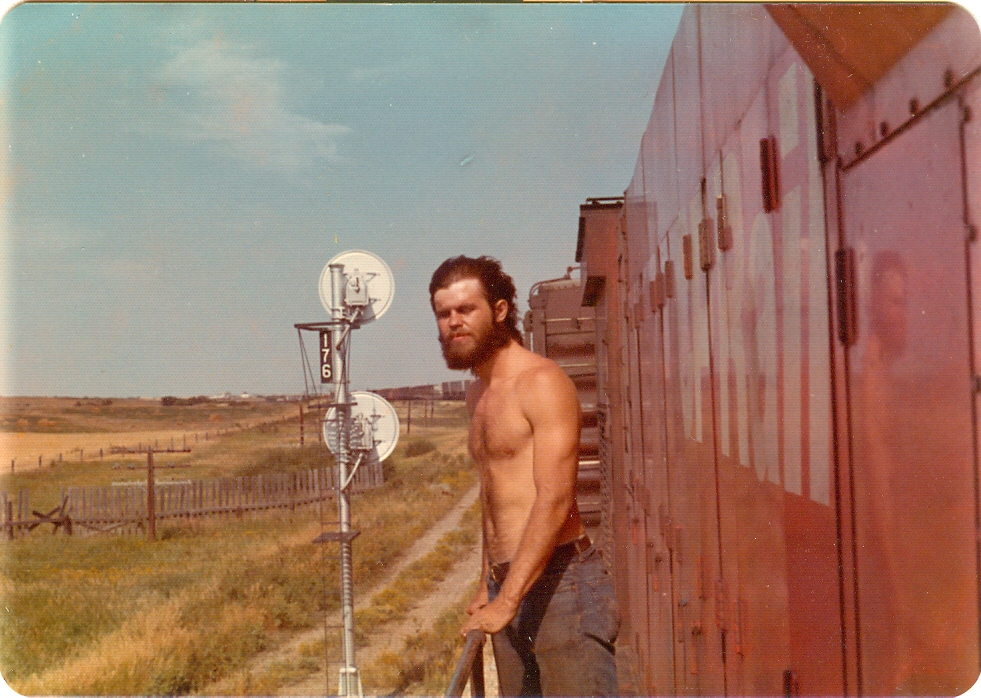 In this photo I am on the rail of the third engine at 75 mph on a Canada Pacific fast freight, near Moose Jaw, Saskatchewan in August 1973.  Once again there were no open box cars.  Marc and I were in the yards in Calgary at 10pm.  We went up to the engineers and asked them if we could ride in the engine!  There were three engines, and the engineers were only in the first engine.
The engineer said, "Do you boys have any booze with you?"
I said, "We have a bottle of red wine."
He said "Well, give me a swig, and you can get on board!"   Little railroad joke.
The engineer was very friendly.  And he said to us, "I can tell you boys are Americans.  Let me tell you, we have some real hard * yard cops here in Canada, they are uniformed and they are armed!  When we pull in to a station, keep low!  If the yard cops catch you it is an automatic three days in jail!"
And the engineer said, "Don't you boys pull any levers!"
We rolled 800 miles across Canada in 24 hours, when they say "fast freight" in Canada they mean it.
We did stop about every 4 hours.  In those yards we laid on the floor and several times, we could hear the yard cops standing outside the window, asking one another if they should bother climbing up and looking for hobos.
Thankfully they never did.  It is hot in Saskatchewan in August!  At several of those stops, the engineers came back to our engine and gave us 12 ounce bottles of ice cold water.   Bottled water had not really been invented in those days, and these bottles said "Coca Cola" on them.  For a couple of Atlanta boys it made us feel right at home.  Those engineers told us that they had seen the uniformed yard cops looking into our engine and was surprised we didn't get busted.   I guess we did a good job of laying low. 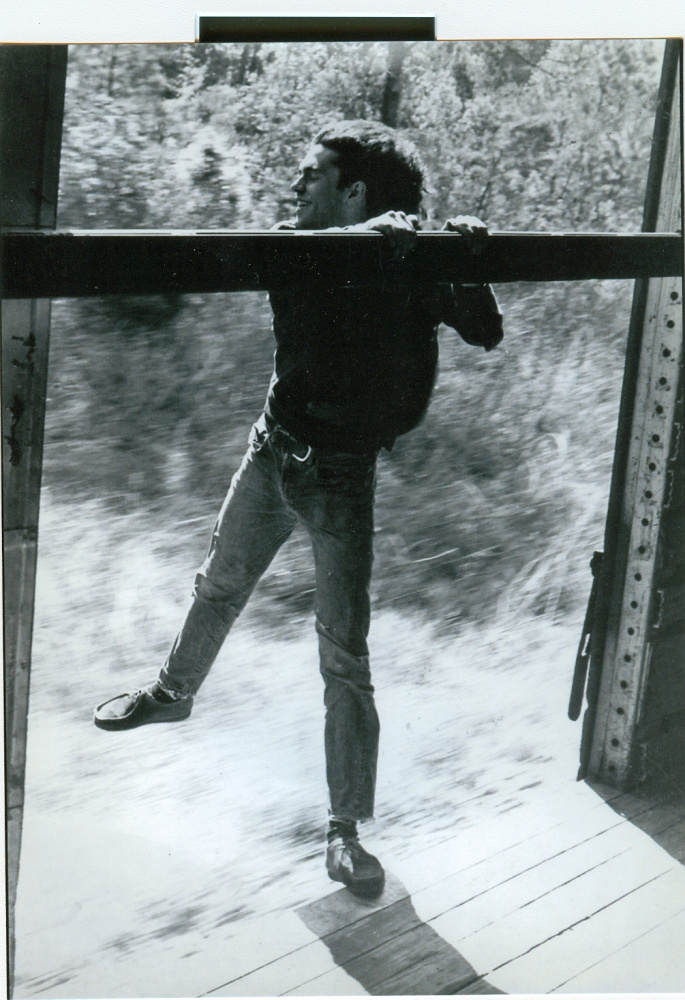 In this photo my buddy Richard is enjoying himself at 70 mph on a fast freight from Atlanta to Chattanooga in August 1972.    Why there was a steel rail across the door, and why Richard was hanging out there I am not sure, could be alcohol was involved.


It is hard to express the feeling of freedom one gets when riding a freight train, especially when in an open box car.  I can still see John and me sitting in the open door of a box car, rolling across Kansas at midnight, passing back and forth a pint of Jack Daniels, those rails making a rhythimic "click   clack " sound, the full moon shining in our eyes.
It has been said that the only two free people in America are the billionaire, and the hobo.  Neither one has to answer to anybody.

In my freight train days my theme song was Glen Campbell's greatest hit, "Gentle on My Mind."  A song about riding freight trains.   See, I had a girlfriend in Atlanta, very cute blonde who wanted to marry me.  I loved her but I didn't want to be tied down in marriage I wanted the freedom of the rails.
As Glen said:
"It's not clingin' to the rocks and ivy
Planted on their columns now that bind me
Or somethin' that somebody said
Because they thought we'd been together walkin'
It's just knowin' that the world will not be cursing or forgiving
When I walk along some railroad track and find
That you're movin' on the back roads by the rivers of my memory
And for hours you're just gentle on my mind

I dip my cup of soup back from a gurgling crackling cauldron in some train yard
My beard a roughning coal-pile, and a dirty hat pulled low, across my face
Through cupped hands, 'round a tin can, I pretend to hold you to my breast, and find
That you're waiting on the back roads, by the rivers of my memory,
Ever smiling, ever gentle on my mind."
4 · Share on TwitterShare on Facebook