Goatroper Member Posts: 251 ✭✭✭
January 2011 edited January 2011 in Gun Rights and Constitutional Law
I know y'all know this, but it's a good one to pass on to any uneducated folks you may know. I'm continually amazed at how much sheer ignorance, misinformation, and outright lies the media passes on.

Good article, and a perfect example of the kind of stuff that's being put out there. I've included embedded links here -- best one is the video of the Big Sandy MG shoot.

Note also that the author of the original Huffington Post article has quite a claim to expertise in this area: he's "a political organizer and strategist for four decades." And a felon: he pled guilty in a plea-bargain deal, and apologized for his part in "swindling nine financial institutions of at least $2.3 million while he ran a public interest group in the 1990s." ( http://www.usatoday.com/news/washington/2005-08-31-congresswoman-husband_x.htm ) But he knows how the rest of us should live.

Robert Creamer's latest in the Huffington Post displays the same level of ignorance that certain congressmen and advocates have assaulted law-abiding Americans with for decades.

If you read a few lines of Robert Creamer's latest contribution ( http://www.huffingtonpost.com/robert-creamer/do-americans-have-the-rig_b_808419.html ) to the Huffington Post, you'll get a good idea of why we can't have a real discussion about gun laws in this nation:

Our laws currently ban guns made of plastic, because they cannot be identified by metal detectors.

There are very few Americans who would support repealing our current laws banning guns on commercial aircraft.

For many years we have banned personal possession of large caliber machine guns - including those that could bring down airplanes.

In 1994, Congress and the president passed a bipartisan assault weapons ban that outlawed private possession or sale of specific types of fully automatic and semi-automatic weapons whose principle uses are to kill people in war or by police forces. That bill also banned the possession and sale of high-volume magazines of the sort that allowed Jared Lee Loughner, the accused Tucson killer, to fire thirty-one shots in rapid succession before stopping to reload. That bill sunset in 2004, and the Republican Congress and Bush administration refused to extend its provisions.

Had it still been in effect it would have been likely that Loughner - who bought the magazines legally - would have had to reload after firing off only ten rounds, which was the maximum magazine capacity under the assault weapons ban. Since nineteen people were killed or injured, that would have prevented the death or injury of at least another nine human beings.

"A political organizer and strategist for four decades" according to his author's bio, you might think Creamer - the husband of a congresswoman ( http://www.huffingtonpost.com/robert-creamer/#blogger_bio ) - might know something about the law. Shockingly, every comment he's made exposes the vast amount of ignorance policy-makers have regarding firearms - both real and imagined.

The so-called "plastic pistol" was never anything other than a myth ( http://www.capitalismmagazine.com/law/guns/3980-unicorns-jedi-and-plastic-guns.html ), but that didn't keep Congress from passing the Undetectable Firearms Act of 1988, and reinstating it again in 2003. The law itself is a case study in ignorant media and politicians feeding off one another's paranoia. It was brought about by misreporting of the then-new Glock 17, a polymer-framer pistol that nevertheless was always composed of a substantial amount of steel, particularly the barrel and slide. No plastic pistols ever existed outside of fantasy, but it didn't keep Congress from banning them, or of bragging about their success in eradicating something that never existed.

Likewise, it is absurd for Creamer and virtually everyone else in the media to claim that large caliber machine guns have been banned. It would no doubt shock them to discover that belt-fed .30-caliber and .50-caliber anti-aircraft machine guns are a staple of machine-gun shoots that take place every year in the more freedom-loving states of the union. This video ( 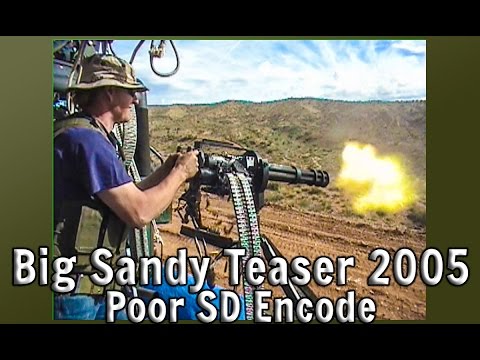 ), from the 2005 "Big Sandy" machine-gun shoot, is an example of an event that even provided remote-controlled flying targets for anti-aircraft gunners.

Contrary to the assertions by Creamer, the majority of the media, and even ignorant senators, the law did not in any way address fully automatic weapons. Not one. It did ban a list of firearms by name. It also declared that firearms that bore more than two features on an arbitrary list of cosmetic features could not be sold. Thus, a firearm such as the much demonized TEC-9 pistol was back on the market the day the ban went into effect as the AB-10 (AB being the snarkily chosen "after ban"), with some of those cosmetic features changed or removed and with absolutely no change in rate of fire, accuracy, lethality, or any other characteristic that could casually be lumped under the catch-all of firepower.

Let me shout this to make it perfectly clear: the 1994 assault weapons ban was a farce.

Weapon-wise, the only thing the "ban" did do was create a market niche for a new class of ultracompact centerfire handguns for concealed carry - and create companies to serve that market, including Kahr Arms and Kel-Tec.

And sadly, Creamer and his ill-educated allies are flat-out lying when claiming: "That bill also banned the possession and sale of high-volume magazines." It did no such thing.

High capacity magazines were always legal to buy, sell, possess, and of course use throughout the life of the entire "ban." The only thing the law did was ban the manufacture of new magazines of more than ten rounds. All existing magazines - including literally millions of factory-new magazines sitting on retailers' shelves - were available for purchase during the life of the law.

If Seinfeld was a show about nothing, these laws were laws about nothing, written by the fearful and ignorant, to address problems they didn't understand with "solutions" that didn't have the remotest chance of working.

There was no measurable effect on the violent crime rate as a result of the ban. There was no significant decrease in the number of semi-automatic military-style firearms sold, and several companies that focused on these weapons actually saw sales increase during the ban. The ban even led to a new class of firearms being created. And of course, high capacity magazines became more difficult to find, but could always be found for a price, including the very magazines Loughner used in his rampage.

Unfortunately for this nation, we can't have an honest discussion about firearms because neither the mainstream media nor the gun banners in the Democratic Party feel that they should educate themselves to a passable level of understanding about firearms and what they are (and are not) before trying to implement laws based on fear, disinformation, and myth. Instead they prefer ignorance. It is too bad that is the weapon they prefer to wield so indiscriminately.