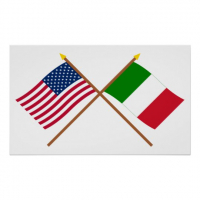 GreatGuns Member Posts: 5,537 ✭✭✭
July 25 in Politics
I first started following the effects of the virus when it originally reared it's ugly head in Italy after leaving Wuhan China. My concerns were simple, we have friends, neighbors and my coworkers there. It's a highly populated country for it's size. My wife and I purchased a 2nd home two years ago, a small villa on the Tyrrhenian Sea in Campania Italy, with hopes of enjoying it each year until ultimately retiring full time there. Enter the virus, exit international travel. At present, there's no telling when we can go over.

I was comparing some interesting data regarding land area, population, virus case count and virus related deaths. I've mentioned before that Italy's land area is similar in size, right between Arizona and New Mexico. With populations of each vastly different, it's interesting to note the differences.

"Confuse what you can of the ending and revise your despise so impending...'Cause I soak on the wrath that you didn't quite mask...
I'm getting it clearly through alternate paths or mixed in with the signal you're sending."  Trey Anastasio
0 · Share on TwitterShare on Facebook