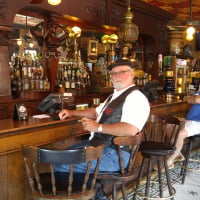 clays Member Posts: 1,817 ✭✭✭
July 2003 edited August 2003 in Ask the Experts
Gentlmen, I was given my grandfather's shotgun many years ago and just recently took it out of the safe to clean & inspect it. I don't know too much about these older model guns so I am going to the experts for information. I was told that he purchased it new around the turn of the century (1900), @ a hardware store in Chatt, Tn, to duck & goose hunt on the Tn river. Stories were that he not only fed the family but also provided grandma lots of feathers for pillows. The gun is a 16ga, remington double barrel (28" length). It appears to have engraving on the receiver and up on to the chambers on the barrels. It has double triggers & auto ejectors. There is a solid matt rib running the full length of the barrels. The stock & forearm are checkered but mostly worn smooth. A rubber recoil pad seems to have been professionally added. The serial # is 158784 & is on all parts of the gun, even stamped into the wood of the forearm. Letters DE stamped into bottom of barrels, along with pat. date: October 30, 1894. Condition of gun is very tight and certainly safe to shoot, by the way these are not damascus barrels. Not much if any blueing left. Main Question? Am considering haveing gun professionally restored, or should I leave as is? Thanking you in advance.
Bob
0 · Share on FacebookShare on Twitter