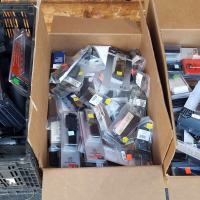 Republican presidential frontrunner Donald Trump -- who said he has a concealed carry permit -- called for the expansion of gun rights Friday, including making those permits applicable nationwide.

In a position paper published on his website Friday afternoon, Trump called for the elimination of gun and magazine bans, labeling them a "total failure."

"Law-abiding people should be allowed to own the firearm of their choice. The government has no business dictating what types of firearms good, honest people are allowed to own," Trump wrote.