Quick&Dead Member Posts: 1,699 ✭✭✭
November 2019 edited November 2019 in Politics
Joy Behar on The View ?Get Elected, Then Take the Guns?

This point can?t be made strongly enough. The Democrats do not want to win elections. They want dictatorial control over our country. We?ve seen multiple presidential candidates pledge to violate the Constitution as soon as they get elected. These promises come in the form of banning guns, abolishing the 1st Amendment to suppress ?hate speech,? and destroying our very electoral process.

They?ve made it clear. They don?t even want to keep having elections once they win. The goal is autocracy, and it always has been.

But, the Democrats also know that they don?t have enough power to seize the government. They have to first win enough elections to fully corrupt the system. Then, they can abolish elections and freedom and rule as they see fit.

This has never been more exemplified than by the women on The View. As tough as it is to acknowledge anything said on that show, Joy Behar really did voice the key Democratic strategy. Lie about policy, get elected, and then eliminate freedoms. It?s a summary of the Communist Manifesto.

Lest you be accused of making things up, you should hear these words straight from Behar?s mouth. The video has the clip. Watch it and see if you take anything away from this other than a desire to seize and keep power at any cost. 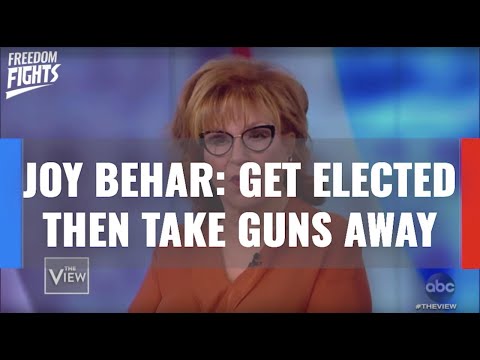 :evil:
The government has no rights. Only the people have rights which empowers the government.
We have enough gun laws, what we need is IDIOT control.
Blood makes you related. Loyalty makes you family.