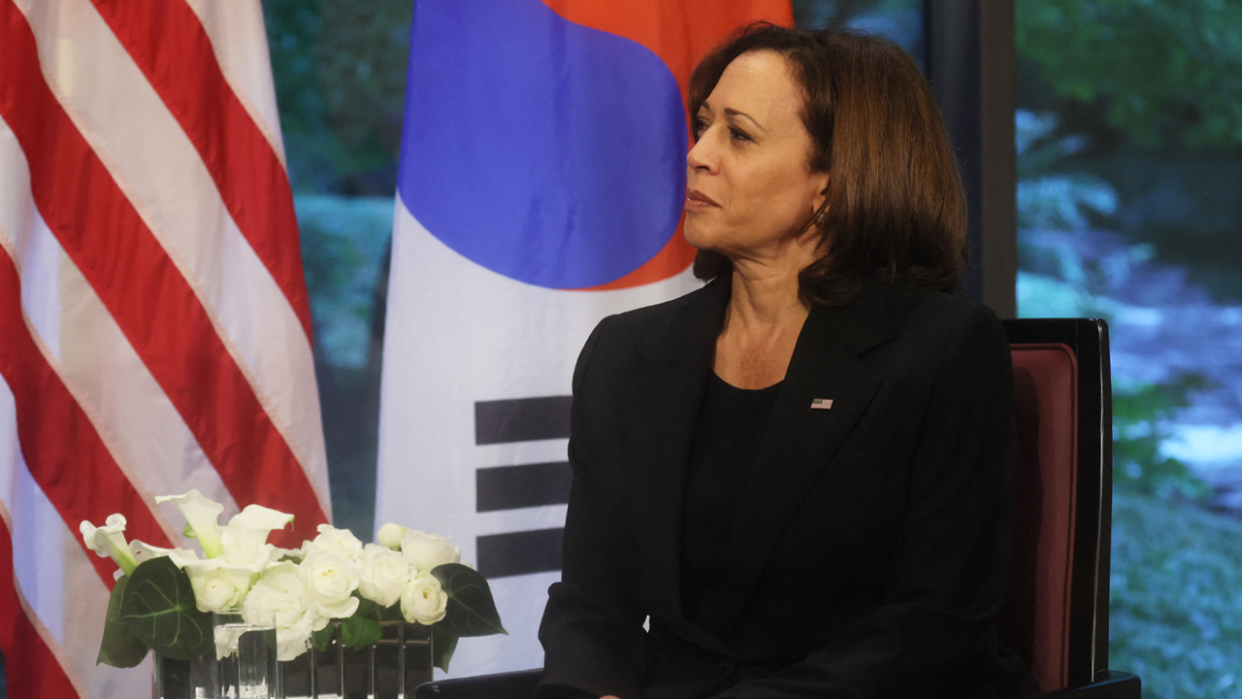 Vice President Kamala Harris made an unfortunate gaffe during her speech at the Korean Peninsula's Demilitarized Zone (DMZ) on Thursday, saying that the U.S. has a "strong alliance" with "the Republic of North Korea."

"It is an alliance that is strong and enduring," she added, intending to refer to the Republic of Korea, which is South Korea's official name.

The vice president then continued her remarks by professing the U.S.' support for South Korea's defense against the increasingly aggressive North Korean government.

"I cannot state enough that the commitment of the United States to the defense of the Republic of Korea is iron-clad, and that we will do everything in our power to ensure that it has meaning in every way that the words suggest," Harris said.

The heavily fortified DMZ, a buffer zone that separates North and South Korea, was Harris' final stop on her diplomatic trip to Asia. The gesture of visiting the DMZ is designed to illustrate America's "rock-solid commitment" to regional security, according to White House press secretary Karine Jean-Pierre.

Harris began her visit by stopping at the Camp Bonifas Dining Facility and thanking American service members. She used binoculars to observe the DMZ, which is roughly 160 miles long and 2.5 miles wide. The vice president then headed to Observation Post Ouellette to give her speech about her commitment to South Korea's security.

Shortly before the DMZ visit, Harris met with South Korean President Yoon Suk-yeol and praised the U.S.-South Korean alliance as a "linchpin of security and prosperity." She and Yoon also discussed South Korea's economic and technology partnerships with the U.S. earlier on Thursday, in addition to a gender equity roundtable.

The visit comes a day after North Korea fired a third ballistic missile into the sea in an act of provocation by Kim Jong-un. The country has previously fired two short-range ballistic missiles during Harris' stay in Japan.

North Korea also made a similar gesture in June by firing a trio of missiles before President Biden's visit to Seoul that month.

Jean-Pierre said North Korea's missile test was "not unusual" on Wednesday, while affirming that it would not dissuade Harris from visiting the DMZ.

"As you know, North Korea has a history of doing these types of tests," she said.

South Korean activists were seen protesting against Harris' visit near the Presidential Office in Seoul on Thursday. The protesters wore masks showing the faces of Harris and President Yoon as they demonstrated against the U.S.-South Korean alliance.

Harris' visit has also drawn criticism from Republicans who claim she has neglected the migrant crisis at the U.S.-Mexico border.

After the DMZ visit, Harris departed from Osan Air Base to fly back to Joint Base Andrews in Maryland.

The Associated Press contributed to this report.