Oh those creative Dems how to win an election

Ballot paper shortage could cause problems on Election Day 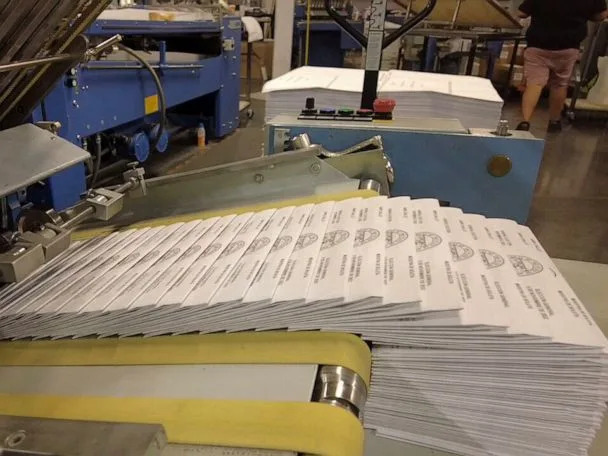 Ballot paper shortage could cause problems on Election Day

A paper supply crunch is testing the preparedness of U.S. election officials and exposing a key vulnerability in America's democratic process as midterm voting gets underway.

The 2022 election cycle will use an estimated 30 million pounds of paper, according to industry experts. Soaring demand and a shortage of manufacturers during the pandemic have pinched national stockpiles, leaving little room for error. 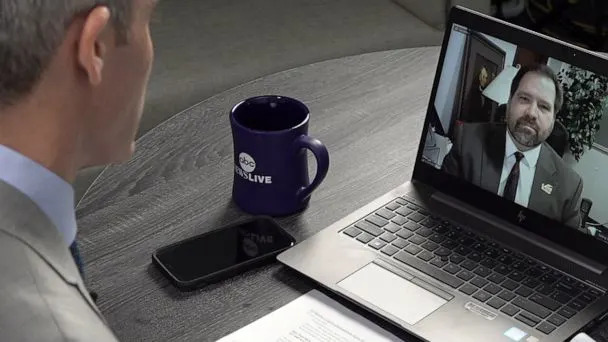 The biggest concern is editing mistakes or last-minute changes to a local ballot requiring a large-scale reprint. "That's when the [shortage] could manifest itself," Hatch said. 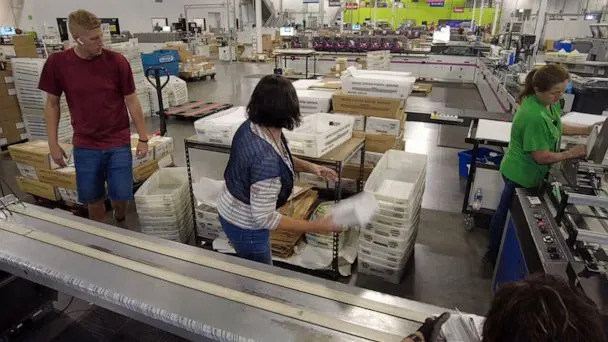 PHOTO: Inside Runbeck Election Services, workers stuff envelopes with ballots and prepare them to be mailed to voters. (ABC News)

ABC News got an inside look at one of the nation's largest ballot producers, Runbeck Election Systems in Phoenix, Arizona, which will deliver 50 million midterm ballots across 10 states -- consuming more than 5 million pounds of paper, according to the company.

Runbeck CEO Jeff Ellington said Defense Production Authorization was granted with help from the Department of Homeland Security, Cybersecurity and Infrastructure Security Agency, and the Commerce Department has prioritized paper supply for the election. 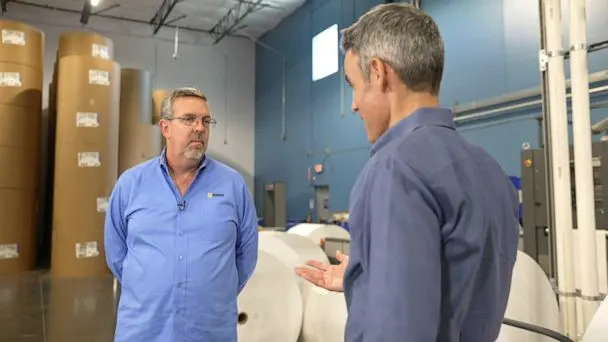 The global transition to digital and virtual work has led to plunging demand for white paper, forcing many paper mills across North America to shut down or convert to more profitable products, such as cardboard.

"I don't blame them for converting over, but it's a very real threat," Ellington said. 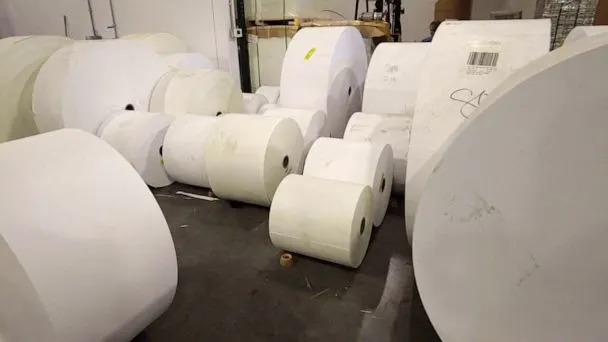 During the pandemic, many surviving paper mills stopped producing new paper and relied on their stockpiles to fulfill orders, experts said. Those have since dwindled. Mill workers and truck drivers have also been in short supply, adding strain on the paper supply chain.

In a nationwide alert issued in January, the U.S. Election Assistance Commission warned state election officials of "unprecedented demand" for ballot paper, with "very long order lead times," and a risk that some "urgent last-minute orders" this year may not be fulfilled. 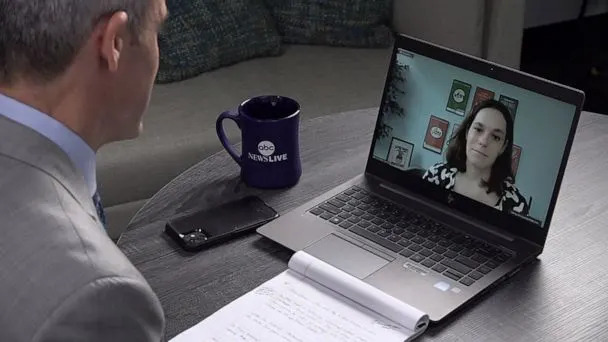 "We need to make sure that we're paying extra close attention to proofing of all materials, because if there was a typo or is a typo, your vendor might not be able to fill an emergency order in that way," said Amy Cohen, executive director of the National Association of State Election Directors. 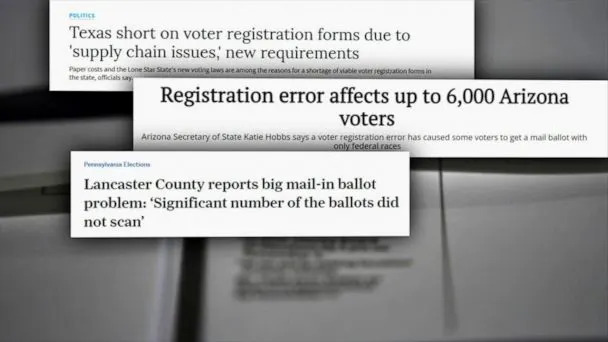 PHOTO: Counties across the country ran into isolated instances of trouble during the primaries and early-voting periods. (ABC News)

With early voting underway in at least 34 states, so far there have only been isolated reports of trouble. In Arizona last week, the secretary of state discovered that 6,000 mail-in ballots that had been sent out were printed with major errors, requiring a second print -- and more paper.

In January, the paper shortage forced Texas officials to strictly limit printing of voter registration forms. And during Pennsylvania's May primary, two thirds of mail in ballots in Lancaster County were unreadable by scanner machines because of a printing mistake and had to be processed by hand.

The Election Assistance Commission told ABC News in a statement this month that the paper crunch "should not impact voting in the general election," so far. 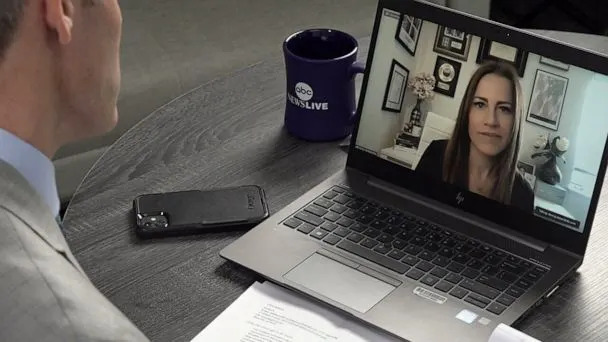 "This is actually a good example of a success story," said Amber McReynolds, former director of elections in Denver, Colorado. "Largely there has been avoidance of a major crisis because of that coordination and that communication."

But experts caution, Election Day could still bring surprises, which may be especially consequential at a time when election integrity is already in the spotlight.

Hatch said "a definite risk" is underestimating voter turnout for mail-in and in-person voting when placing a ballot order. "Trying to gauge turnout is actually quite difficult," he said. 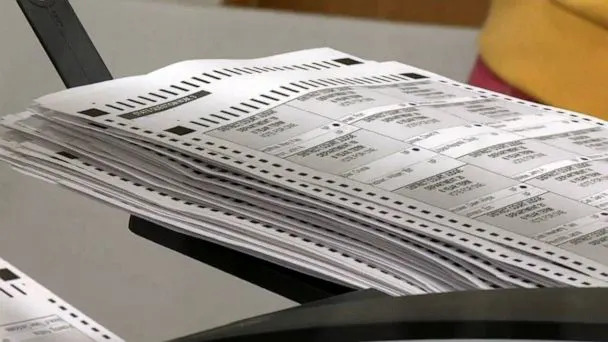 PHOTO: At Runbeck, all of the ballots get printed on machines that run at 500 feet per minute. Runbeck moves about 20,000 ballots every hour. (ABC News)

For states where voters have to file a request to get an absentee ballot, "election officials really don't know until within 60 days of the election how many people are going to sign up to get that ballot," McReynolds said.

"The operational predictability is not as good," she continued. Election officials really "have to kind of guess really at how many voters might vote that way, and then they have to place orders."

Although rare, underestimates have happened. During the 2022 Massachusetts primary, a town-wide ballot shortage in Marblehead forced election officials to photocopy ballots, which could not be run through voting machines and had to be counted by hand.

"It's not realistic to think that the problem is solved. It's not," Cohen said. "The ballot printing vendors have already made it clear to us that this is going to be a persistent problem and something that we need to be thinking about for 2024."