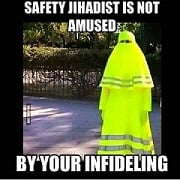 I'll bet he wishes he'd had a gun!